Dreams of the World: One Dream a Time. This post is the first in the series Dreams of the World, which profiles interesting people Kike meets during his travels.¨My dream is to empower people. with my writing, my speaking, and my advice to small companies,¨said Guy Kawasaki, Silicon Valley author, investor, business advisor, and Macintosh Division employees who evangelized Macintosh to developers.

Born in Honolulu, Hawaii in 1954, he never had heroes when growing up. His mother taught him how to be tough. ¨Life is waking up in the morning, and grinding it out,¨ said Kawasaki. Still, he learned big lessons from others. ¨I learned from Marty Gruber how to sell. It’s not about selling a commodity or the features of a product but to sell the benefits. Marty was the president of the jewelry company that I worked at from 1979 to 1983.¨

¨Al Eisenstat was my Godfather at Apple. He showed me how corporate politics works—to not burn your bridges and to be nice to everyone,¨ said Kawasaki. ¨ Al was the general counsel of Apple. He protected me during the Jobs-Sculley-Gassée-Campbell wars that took place at Apple.¨

When I asked about a funny moment, Kawasaki said ¨I was stopped at a traffic light. There was a car next to me with young women. They were staring at me. I thought that they must have know who I was. I rolled down the window, and one asked me, “Are you Jackie Chan?¨

The moments of his life he will never forget are connected with his children. Two are his biological children, and two were adopted from Guatemala.  One of his passions in life, along with his family and his wife, is hockey. ¨ This sport has a combination of ballet, war, and mathematics,¨ explained Kawasaki.

¨One of the biggest lessons in my career,¨ said Kawasaki, ¨is understanding that the best product does not necessarily win.¨ After attending Stanford, he went to law school at UC Davis, where he lasted two weeks before realizing that he hated law school. In 1977, he enrolled in the UCLA Anderson School of Management, where he received his MBA. 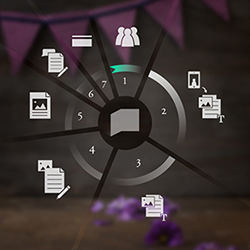 Four things about Guy Kawasaki people might not know about him:

Four life lessons you should know according to Kawasaki:

Biggest mistakes people do in social media according to Kawasaki:

Three things beginners should know when entering the social-media world according to Kawasaki:

Three books everyone should read according to Kawasaki:

If You Want to Write: A Book about Art, Independence and Spirit